A huge thank you to Ms Ronan and our Green Schools Committee who have worked tirelessly all year.

The Green Schools Awards were held online on November 11th this year where Ms Ronan and the Green Schools committee were delighted to be presented with the schools 4th flag for the ‘Travel’ theme.

All pupils, families and staff played a huge part in earning this particular flag over the past two years. The committee would like to express a special thank you to everyone who walked, cycled, parked n’ strided and carpooled. We appreciate it wasn’t always easy on those wet days but your efforts really paid off. We really hope you continue to use Greener methods of Travel in the future.

Along with the new bicycle shelter, you may have noticed new road markings around our school entrances and resurfacing works in the local area. The Green Schools committee contributed significantly to these developments.

Ms Ronan also organised the Spring Clean to finish this year, a very safe and efficient way to keep our school Litter-Free still allowing all pupils to play their part.

Keep up the great work guys and thank you!!

Wednesday, June 14th was our Low Energy Day and we  are expecting great savings on heat, water and electricity in comparison with other days. Watch this space for updates.
ENERGY CONSUMPTION
April 2015…..18919 kWh
April 2016…..11936 kWh
Well done everyone. We have reduced our energy consumption by 6980 kWh

Ms. Ronan and the boys of the Green Schools Committee were invited to the opening of the new Thomas Clarke Memorial Garden opened last week in memory of the 1916 leader and signee of the Proclamation. Check out some of the pictures below. 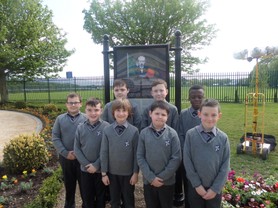 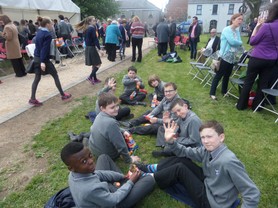 We have received the fantastic news that all our hard work this past year conserving energy, has paid off.
We will receive our second green flag at a presentation in the Helix Theatre in DCU next month.
Many thanks to all the pupils and staff for their efforts to reduce our energy consumption in the school.
Our Green Schools Committee has worked very hard to lead our task. Mrs. Aisling Sheridan of Louth Co. Co. visited the school and questioned the committee members on how we had saved energy and money and what steps we took to make the savings. She was very happy and impressed with all our hard work and the results we achieved.
Special thanks to Ms. Ronan and Mrs. Hughes for their encouragement and help. Now onwards to our 3rd Green Flag
Our teachers and 2 pupils will travel to DCU to collect our second Green Flag next week. 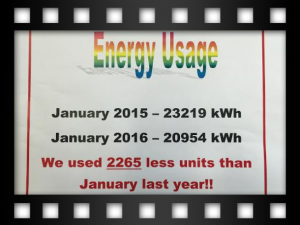 St. Malachy’s Green flag committee consists of both pupils and staff. It is co-ordinated by Ms Ronan. Mrs Hughes plays in an integral part in the implementation of our Green School’s programme also. The committee work tirelessly to encourage and inform the rest of the school and the wider community about all aspects of the Green Schools programme in the Friary.
We embarked on our first Green Flag for Litter & Waste back in 2012 under the guidance of Mr. Martin and MS. Rocks. After a two year programme the school was awarded their first Green Flag which flies proudly from the rooftop of our school building. In 2014 we began working on our second theme- Energy. An Energy Squad was established which is made up of 24 children from 2nd-6th. Along with the Green flag committee these children help make our aim of reducing energy possible.
Not only do we wish to reduce the energy consumption here in school but we also hope that parents, families and friends will join us and try to reduce their own energy consumption at home.
We are very appreciative of the support we receive on our Green Schools journey from the staff, pupils, parents, Board of Management, local media and the wider community.
Winner of Green Schools Colouring Competition 2015 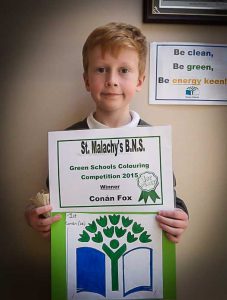 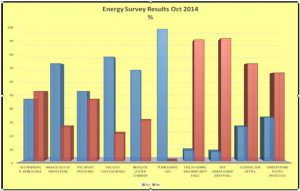 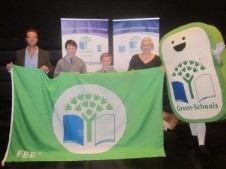 The presentation of our first Green Flag took place in Dublin on May 21st 2014.
Mr. Martin, Ms. Rocks and two committee members attended the ceremony.
Working Towards a Green Flag 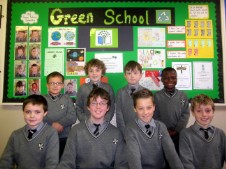 For almost a year we have been busy with the quest for our first green flag. All classes have been involved and have participated enthusiastically.
Mr. Martin, Ms. Rocks and the committee would like to acknowledge the support and co-operation of the children and staff.
Spring Clean 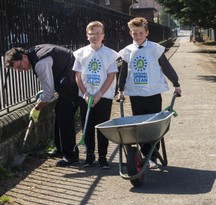 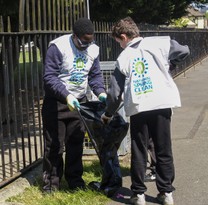 On 23rd April we took part in An Taisce Spring Clean. Over forty boys from 2nd – 6th class took part. The boys had a great time and did fantastic work. Teachers were overwhelmed at the effort everyone made. The children cleaned up all the litter in the driveway, the car park, and the school yards and the adjoining path. In addition, they also tidied up along the kerbs and swept up any leaves left lying around. All the hard work under the heat of the sun led to the children working up a thirst. Luckily, there were some lovely cool drinks awaiting everyone when the clean – up was over. The Green Flag Committee would like to express huge thanks to all the boys and staff in St. Malachy’s B.N.S. and Louth County Council for their continued support.
Low Energy Action Day 2015
On 13th May the whole school took part in a Low Energy Action Day. Meter readings were taken in the days leading up the Action Day and on the day itself to compare how much we managed to save. Children and staff made a huge effort in trying to cope for one day without using any unnecessary electrical equipment. We also turned off the heat earlier than we usually would.
We used approx 400 less units than on a normal school day. What an achievement!
Anti – Litter Poster Competition 2015
Boys from 2nd – 6th took part in the school’s Anti – Litter Poster Competition after the Spring Clean. There were some really excellent entries and the judges had a tough decision to make. There was a prize for the winner from each class and one overall winner.
The overall winner was Dennis from Mr Wynne’s 6th class. 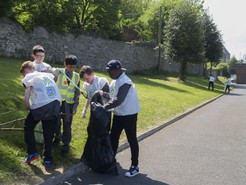 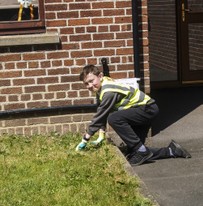 Our Green Code
Pick up any litter
And make the Friary shine,
Always recycle when you can
And we will be just fine!!
St. Malachy’s B.N.S. Low Energy Action Day
We saved 244 units in one day!!
May 13th 2015